I wrote this article for my Pastor's page this week at First Baptist Church of Arlington, Texas. I decided to publish here as well:

It is a powerful force. Music. It is an incredible medium of communication. It is also profitable. Last year, the revenue in the music industry in the United States was $15.2 billion! Our nephew, Ben Vaughn, is in the music business in Nashville. In fact, Ben is the Executive Vice President of Warner/Chappell Music Publishing and he leads its Nashville office. On behalf of Warner/Chappell, he accepted the American Society of Composers, Authors and Publishers (ASCAP) award in November in Nashville as the Music Publisher of the year. He also was honored two weeks ago by ASCAP and Belmont University with the 2015 Music City Milestone Award. We are pretty proud of him. Ben knows music.

I, on the other hand, am not as proficient as my nephew. I had a tonette solo once in the fourth grade music class at Wylam Grammar School in Birmingham, Alabama. I did a pretty good job with my rendition of This is My Country! But, my music career was short-lived. I can still play the Ensley High School Alma Mater on the tonette, though.
I am not a musician. I am not in the music business. But, I do value and appreciate music. In fact, I love music. And—I enjoy music. I like lots of genres of music. I have wide tastes. There is no rhyme or reason for my tastes – I just know what I like. I like to listen to Elvis (who doesn’t?), Simon and Garfunkel, James Taylor, Elton John -- but, I enjoy classical music, jazz music and a little bit of country music. I also like hymns, psalms and spiritual songs. I am moved by the truths expressed in some contemporary Christian music as well as in some hymns.

Right now, I am singing through the Baptist Hymnal (Convention Press, 1991) in my devotional time with God. I’m sure He is amused! But – I do believe He is pleased. I have felt led by Him to do it. I’ve been amazed by how many hymns I don’t know. I have enjoyed praising Him through music expressed so personally and privately (thank goodness, because I’m not much of a singer!).

I think God has used this exercise to remind me of the beauty and passion of music. He has also has used it to remind me to remain humble and gracious about music. As a Baptist pastor in the 21st century, I know how controversial music can be! As you might imagine, I have received numerous communications through the years about what kind of music God likes!

But – I am not trying to open a can of worms. I am just noting how powerful and beautiful music can be. I’m grateful to God for gifting people to compose, write and perform music. We are all better off because of it!
Posted by Dennis Wiles at 7:53 AM No comments:

The Blood of the Martyrs

Tertullian - an early convert to Christianity (AD 200), became a leader in the ancient Church. He hailed from Carthage (modern Tunisia in North Africa) and wrote extensively on behalf of the Christian perspective. He was especially inspired by the Christian martyrs. After observing how Christians were willing to die for their faith, he wrote: Plures efficimur, quoties metumur a vobis: semen est sanguis christianorum - We multiply whenever we are mown down by you; the blood of Christians is seed.

This week the world has looked on as murderers representing ISIS led a group of Coptic Christians to a beach in Libya (Simon of Cyrene was from Libya - as were a number of Jews present at Pentecost according to Acts 2:10) and beheaded them in a brutal act of cowardice. The faces of the Christian martyrs were all on display in the photos and the videos. Of course, the ISIS murderers had their faces covered as always.

First, I would offer that a hood does not shield a person's identity from God. These murderers may not be brave enough to allow their identities to be known to the world, but God knows each of them. Remarkably, He loves them. He offers them an opportunity to experience eternal life through Christ.

Second, I would point out that this method has never worked. These Muslim extremists are not the first group of people to persecute Christians. Followers of Jesus have been persecuted for centuries. And--it has never worked. Beginning with the first Christian martyr, Stephen, believers have been tortured, ostracized and slaughtered. While in Rome recently, we visited the only "round" church in the city - Santo Stefano Rotondo. It was built in AD 455 and contains 64 frescoes depicting various martyrs of the faith. 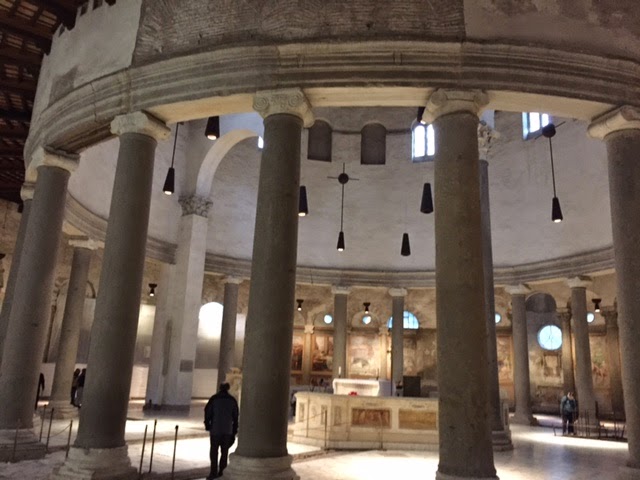 It was quite humbling to walk through this ancient church and reflect upon the sacrifice of believers who paid the ultimate price for their belief in Jesus. Only in eternity will we be able to truly grasp the cost of the spread of Christianity across the world.

But - to my point, the decision to kill Christians has never worked to stop the spread of the Gospel. In fact, to the contrary -- Christianity has historically grown in the face of such persecution. Tertullian was right in his observation. Killing Christians actually leads to more Christians!

Today - I invite you to pray for the families of these brave martyrs who spilled their blood in Libya. Let's pray for the persecuted Church across the world. Let's also pray for the light of the Gospel to penetrate the hearts of those who continue to propagate evil and violence on others. Remember -- the greatest evangelist the Church has ever had was present at the first Christian martyrdom!

Posted by Dennis Wiles at 9:58 AM No comments:

I've just returned from leading my 7th annual Church History tour of Rome. Once again, I was overwhelmed and blessed by the experience. My colleagues, Curt and Kim Grice handle all of the logistics of the trip. I am always indebted to them in particular. 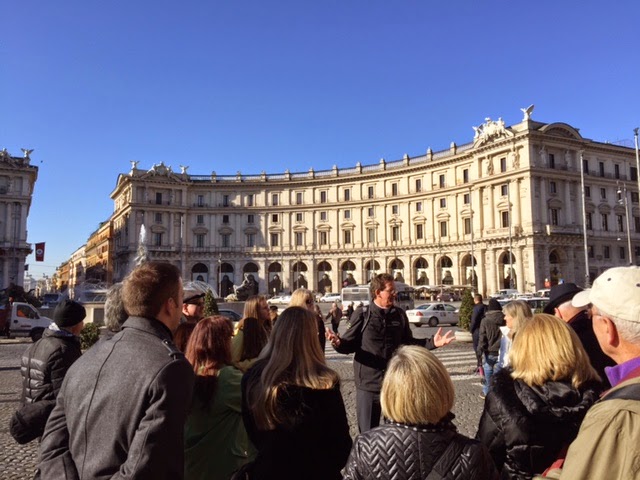 We spend our time viewing the ancient sites, historically significant places, churches (lots of churches) and living in community for a few days. I do several lectures each day to set the context of what we are seeing and how it fits into The Big Story. We read the story of Jesus and the writings of Paul and connect them all to the city of Rome. Did I say I love it?

I probably have two favorite eras of Church History: Ancient Christianity and the Reformation. Our tour allows me the opportunity to address both of these significant periods of the history of Christianity against the backdrop of both the seat of the Roman Empire and the Roman Catholic Church. It truly is a unique experience and offers our people a different setting for a spiritually formative exercise.

The story of Christianity is a remarkable one. It begins as a small Jewish sect in an outlier province of the Roman Empire. Caesar Augustus is fully in control of the Empire at this point in history. The city of Rome itself is on its way to becoming the metropolitan wonder of the ancient world. In less than 325 years, this small Jewish sect becomes the dominant religious choice of the Gentile population of the Empire. The Christianization of the Roman Empire is one of the most incredible stories in the history of humanity.

Christian communities appeared in all of the major metropolitan areas of the Roman Empire. Alexandria, Antioch, Ephesus, Corinth and Rome itself were all affected by the rapid growth of the numbers of Christians within them. The pastors of these churches were brilliant leaders who led the Church to grapple with the complex theological issues at hand. Believers spilled their blood along the way as the Gospel took hold of the ancient world.

I am always humbled by re-visiting this story in its Roman setting. I thank God for such a sturdy Gospel that truly has changed the world. When in Rome -- I am always encouraged and reminded of the commission to take this Gospel to the ends of the earth.
Posted by Dennis Wiles at 8:36 AM No comments:

Dennis Wiles
I am the Pastor of First Baptist Church of Arlington, Texas. I love my job! I'm originally from Birmingham, Alabama where I attended High School and College. After graduating from UAB, I earned both a Master's Degree in Theology and a PhD in Church History from Southwestern Baptist Theological Seminary in Ft. Worth, Texas. I'm married to Cindy -- and we have two children and three grandchildren.